AVAILABLE IN THESE REGIONS

The Smardt Chiller Group was established to maximize the customer benefits of the Turbocor oil-free centrifugal compressor technology in chiller performance. Driving whole life costs of ownership way down, your Smardt chiller saves you money, year after long year, while reducing your carbon footprint and making a major contribution to the future of the planet. Working with the Turbocor technology longer than any other HVAC manufacturer in the world, the Smardt Chiller Group has developed a lead in performance and reliability which translates into major benefits for owners – and the environment.

Smardt (founded in Montreal, Canada in 2005 to focus on oil-free centrifugal chillers) and PowerPax (founded in Melbourne, Australia in 2000 as a specialist heat-exchanger group), joined forces during 2005 to form the Smardt Chiller Group.

After several years of rapid growth, an additional Smardt factory was opened in Plattsburgh, New York in 2010, and a sales and service operation opened in Singapore. In 2011, Smardt acquired the well-known OPK Klimatechnik business in Stuttgart, Germany – an outstanding European pioneer in oil-free centrifugal technology. In 2012, Smardt’s China manufacturing operations opened in Guangzhou, Guangdong.

In 2015, Smardt partnered with the highly regarded Brazilian chiller manufacturer Transcalor, to sell and manufacture Smardt’s chiller technology in Brazil. In 2016, Smardt entered into a partnership with Euroklimat (EK) – the largest European brand in China with 29 branches across the country – to develop, manufacture and sell Smardt chillers under the Smardt-EK brand.

The heart of every Smardt chiller is its Turbocor oil-free centrifugal compressors, which integrate rugged magnetic bearings systems with variable-speed drive, high-efficiency centrifugal compression and on-board digital electronics to achieve a revolutionary leap, a quantum leap, in part-load energy efficiency.

A quantum leap in energy efficiency 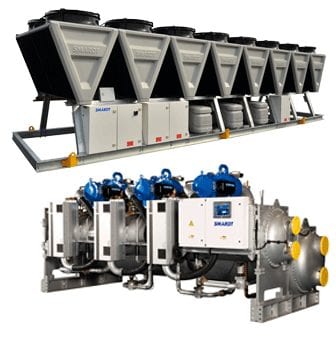 All Smardt chillers, whether water‑cooled, air‑cooled or evaporative, are designed to optimize the performance of oil-free centrifugal compressors from Danfoss Turbocor Compressors Inc. These use oil-free magnetic bearings and variable-speed drives to deliver better IPLV efficiencies than conventional oil-lubricated centrifugal, reciprocating, scroll and screw compressors.

Over 90,000 magnetic bearing compressors are operating in the field, mainly in high-end vacuum pumps and CNC spindles – any innovation risk with this component technology has been long overcome.

The Smardt engineering team, many with long experience actually developing the original Turbocor compressor technology, came together to bring a definitive high-performance range of water-cooled, air-cooled and evaporative oil-free centrifugal chillers to the market. Each Smardt chiller saves its owners money – money in operating costs, money in maintenance costs, money because of high reliability and redundancy which practically removes mechanical risk altogether.